Reach the tourists who spend the most

In 2016, grapevine.is received about 3.5 million visits, with 80% of our visitors coming from IP addresses outside of Iceland. The vast majority (about 1.3 million visits) were from North America, followed by Britain (about 350.000 visits) and then Germany and France. About 60% of Grapevine visitors are between 25 to 46 years old, and 25% are older than 46. 950.000 visits to the site were from people known as "in-market" for the tourism industry. This means that their search and visit history on the site indicates they are comparing prices and are prepared to spend money for air travel, tourist activities and accommodations through the internet.

- Want to be big, be big on our site. Custom ads available, for example using the website’s background and border areas. Limited time for maximum impression, up to a week. Minimum size 970x200px. - Choose a banner at good placements Sizes: 300x600, 970x200px or 800x600px. All advertisers turn in 300x250px for mobile. One size submitted by the advertiser, a maximum of three ads are rotated in the space available. Targeted ads available. - Be everywhere around the site Sizes: 300x250 and 480x320 px. Both sizes submitted by the advertiser, a maximum of nine ads are then rotated in the spaces available around the site. 
The app suggests a restaurant, with information on location, the phone number, with a short review based on a former full review in the Reykjavík Grapevine.

The Reykjavík Grapevine is an English language magazine and its main goal is to remain a reliable and trusted source of information and entertainment for tourists, expatriates and anyone else who is interested in reading up on local social issues, culture and the arts. The magazine is published twenty one times a year, and is distributed for free all over the country. Due to our excellent distribution network and dedicated readership, The Reykjavík Grapevine is by far the Icelandic tourist market's most prevalent publication.

WHERE IS THE REYKJAVÍK GRAPEVINE DISTRIBUTED?

WHAT ARE OUR MAIN PLACES OF DISTRIBUTION?

At the Keflavík international airport in the arrival hall, in the baggage claim hall and around the duty free area

WHO READS THE REYKJAVÍK GRAPEVINE?

The Reykjavík Grapevine is first and foremost a tourist magazine. It is designed to guide and assist tourists, and its articles are written to provide tourists with an insight into Iceland's cultural life and national spirit. According to a survey conducted at Keflavík international airport, 33% of tourists that left the country from January through April had read The Reykjavík Grapevine during their stay.

There have never been as many New Icelanders residing in the country as today. They read the Grapevine to follow their own affairs, the local cultural life and to participate in and contribute to the local discourse. In the beginning of 2013 there were around 30,000 New Icelanders.

The Grapevine's fresh and uncompromising stance on covering local events and culture, along with its wide distribution network, ensures the magazine is very popular among Icelanders. According to a Gallup poll from March of 2008, 21.1% of Icelanders in their thirties read the magazine regularly.

What is Best Of Reykjavík? Since 2009, the Best of Reykjavík has been issued as a part of the Reykjavík Grapevine’s publication schedule. The magazine contents and what is chosen as “best” is determined through the opinions of many. This special issue has been extremely popular in recent years, and in the summer of 2016, we decided to raise the bar by publishing Best of Reykjavík as an independent publication, four times per year. Best of Reykjavík covers restaurants, fast food joints, clubs, stores, services and other amusements. We emphasise those venues which we consider best in their category, which venues are in 2nd and 3rd place, along with the winners over the past five years. At the same time, we look ahead towards what places are likely to become the best. The categories are as follows: Dining & Grubbing Drinking & Nightlife Shopping & Commerce Activities & Fun times Reykjavík Institutions (i.e., establishments that are a deep-rooted part of Reykjavík history and culture) These categories are also divided into several subcategories. Best of Reykjavík aims to compile a comprehensive overview of everything that is “best” about Reykjavík for every part of the year. We believe it is crucial to provide this to our readers, to put various and sundry venues in a new context depending on who the reader is, how long they plan on staying in Iceland, and during which time of the year they are visiting. Editions and Distribution of Best of Reykjavík - 25,000 copies (100,000 per year*) - Tourist information centres - Major tourist destinations - Cornershops and stores - Cafés and restaurants - Hotels and guesthouses - Swimming pools and museums - Car rental agencies - Air Iceland airports around the country - Every Go Car Rental office Print days and issue periods February 17 - May 25 May 26 - August 17 August 18 - November 16 November 17 - February 15, 2018 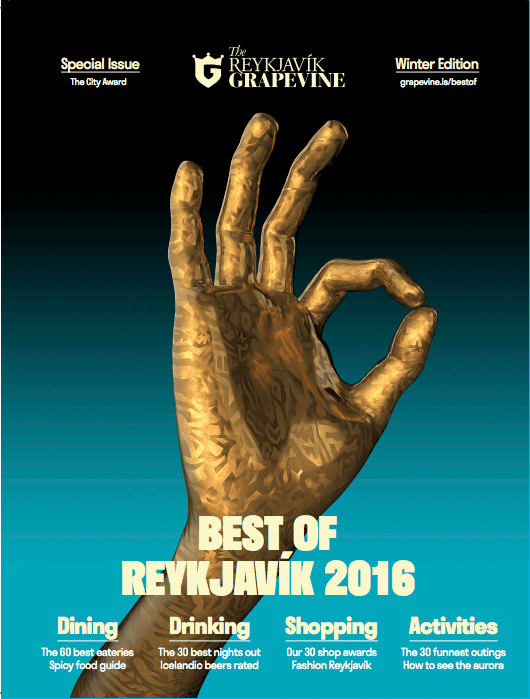 These are pads of 50 maps each, which can be found in hotel lobbies all around downtown Reykjavík, in tourist information centres, and in shops that are popular with tourists. They have been popular with workers at these establishments because the paper is especially chosen to be easy to write directions on them (not glossy paper), and such workers often find themselves providing directions for tourists. We print about 1,000 map pads per year, 50,000 in total, and they are printed in June. Issues and distribution - 1,000 pads will be printed (50 maps in each pad) - Hotel lobbies and guesthouses in downtown Reykjavík - Tourist information centres - Popular shops and cafés in downtown Reykjavík Print days and issue periods June 9, 2017 - early June 2018 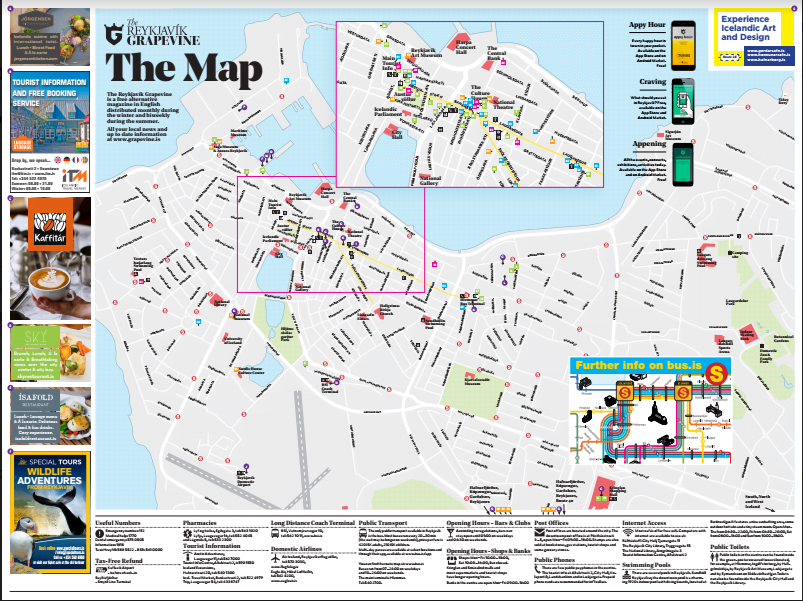 The Iceland Airwaves festival will be held from November 1 - 4 next year, and we will as before publish a special Airwaves issue for the festival. The paper is very much its own creature - that is, not in accompaniment with copies of Reykjavík Grapevine - much like the Best Of issues. 25,000 copies of the Airwaves edition will be printed, and will be distributed on board all Icelandair flights through the festival, in addition to distributing the paper in the festival area; i.e. all music venues, cafés and restaurants downtown, and all ticket-holders will get a copy with their wristband. The Airwaves issue will have the full lineup and schedule, both main events and side venues, along with light reading material, such as where festival goers can go for food, drink and relaxation downtown. The Airwaves Special is printed in 25.000 copies and distributed at the following locations: - The seat pockets of Icelandair flights - Directly into the hands of ticket holders - Festival venues - Cafés, shops and restaurants downtown - Tourist information centres Print days and issue periods October 13 - November 5 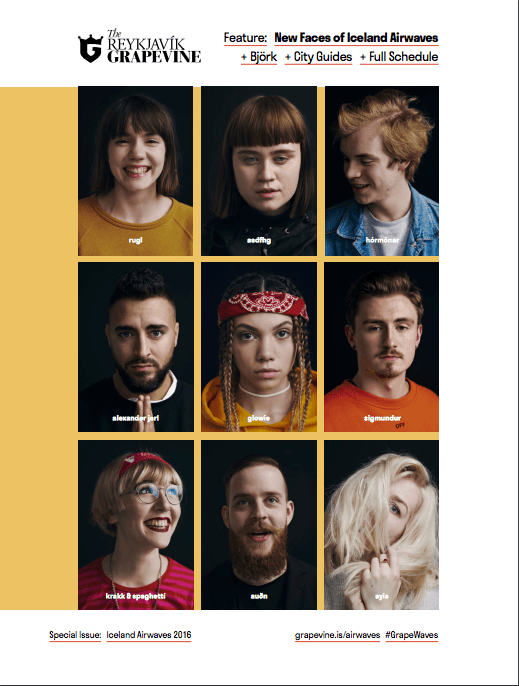